In ASP.NET Core, Microsoft recently introduced ‘user secrets’, which is an API that aims to keep sensitive data out of the project folder. This means that if any code in the project is checked into some code repository, there will be no sensitive data included with it because those secrets are kept outside the project and stored in a user’s profile subfolder. User secrets are only intended for development work and are not a trusted store because their content is unencrypted.

For local development, User Secrets is the preferred way to store sensitive values. This tool manages storing configuration values outside the working directory of your project (in your user profile directory). This works well for local development, though it’s important to be aware that User Secrets doesn’t encrypt the secrets, it just moves them to a location you’re less likely to accidentally expose.

.NET Core has introduced User Secrets manager tool which we can use to store application variables outside the application folder.

How to set up user secrets with secret manager in dot.net core project:

In Visual Studio, right-click the project in Solution Explorer, and select Manage User Secrets from the context menu. 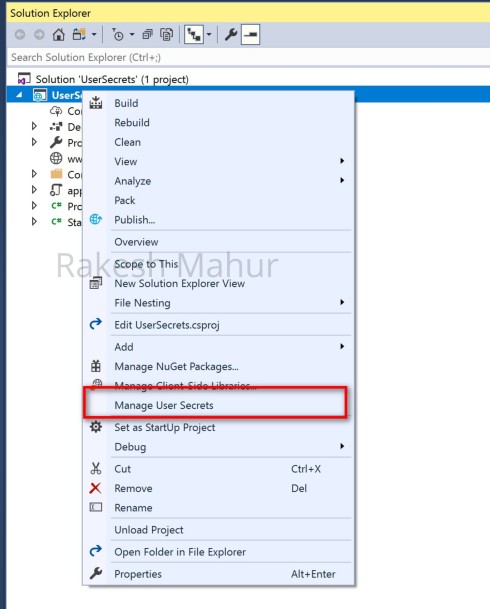 The Secret Manager tool operates on project-specific configuration settings stored in your user profile. To use user secrets, define a UserSecretsId element within a PropertyGroup of the .csproj file.

Once you click on manager user secrets option then system will create a secret json file and add new configuration entry in .csproj file with node and a unique guid is mapped with this node.

secrets.json file is contain all sensitive information in key/value pair which is required for solution and make sure that all such information should not exists in appsettings.json file in solution.

you can also verify that system generate a folder with guid as same guid mapped in <UserSecretsId> node in .csproj file. 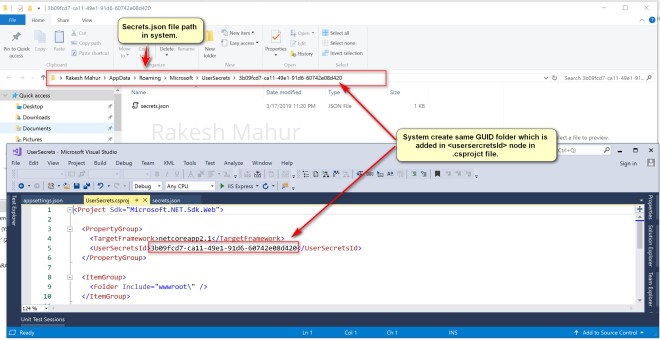 secrets can be added and updated using the “dotnet user-secrets” commands.

example: As we have already configured some keys in user secrets and now we have to update user secrets with new value,In our secret file there is a key with name “ApiKey” with value “Swindon@123”.let’s list all secrets to verify this.

Now we have to update “ApiKey” value with “Test@123” then below command needs to be execute and then we can see updated value.

How to consume secrets in dotnet core solution:

In order to load our User Secrets, we need to make a few changes to the Startup.cs file. We need to:

Add User Secrets to the application builder in startup.cs file.

Here we’ve added a string to hold our user secret and we’ve instructed the application builder to add the user secrets configuration to our application.

The Secret Manager tool does not encrypt the stored secrets and should not be treated as a trusted store. It is for development purposes only. The keys and values are stored in a JSON configuration file in the user profile directory.