New .NET Core is the biggest change since the invention of .NET platform. It is fully open-source, components and is supported by Windows, Linux and Mac OSX. In this post I am going to give it a test ride by creating a containerised C# application with the latest .NET CORE.

Docker containers allow teams to build, test, replicate and run software, regardless of where the software is deployed.Docker containers assure teams that software will always act the same no matter where it is – there’s no inconsistency in behavior, which allows for more accurate and reliable testing.

The main advantage to using Docker containers is that they mimic running an application in a virtual machine, minus the hassle and resource neediness of a virtual machine. Available for Windows and Linux systems, Docker containers are lightweight and simple, taking up only a small amount of operating system capacity. They start-up in seconds and require little disk space or memory.

docker installation is available for Mac and windows and can be downloaded from office channel. clickhere

here we will try to build asp.net core webapi and host/run on container with the help of docker.

Now provide project name,solution name and other details like where to save the project. 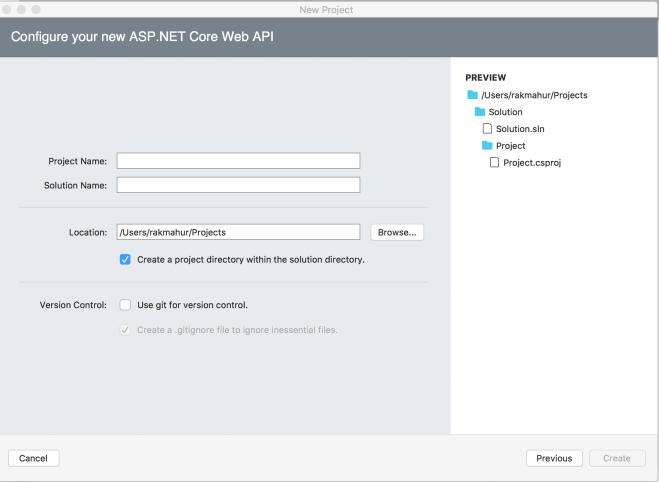 Now our newly created project structure looks as per below 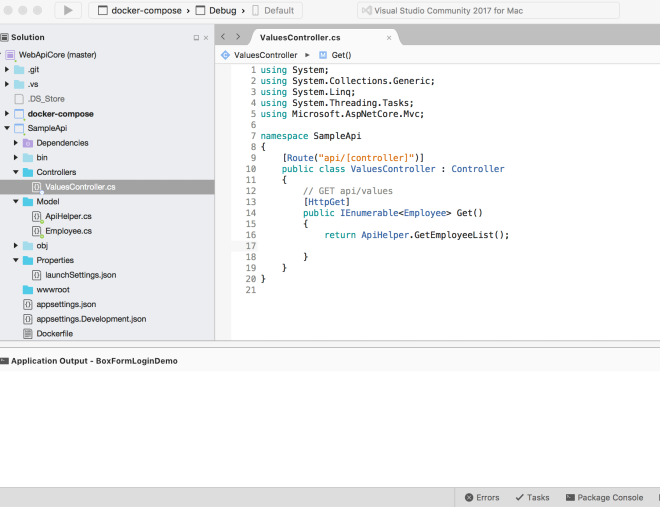 Here we have very simple case where service only returns some information about employees as our main objective to host this tiny application on container.

Now add docker file in project  and write instructions that how the docker image build from base image of asp.net core image.

Below are the instructions issue to daemon to create docker image.

search for “Terminal” on mac machine and open new window.

Once we click on new window option then command window will appear and now all set to issue/write docker command to create docker image.

The docker build command builds Docker images from a Dockerfile and a “context”. A build’s context is the set of files located in the specified PATH or URL . The build process can refer to any of the files in the context

here our image name is “firstapiwithdocker”,so command should be

at the moment we can see daemon accept the command start creating the docker image from the docker file instructions.

Now we have to verify that require image has been created or not,so below command have to issue list down all the images.we can see all the important information about images like image name,tag,imageid,created date and size. in below image we can see that out newly created image listed with other base images.

6.Run image with in container:

Till now we have successfully created docker image for our webapi solution and contain all the necessary files and now we have to create container to run this image.

below command will create container.

Now List down all containers and we can see all the important metadata about containers like containerId,ImageName, Command,Created date,container status,Ports and container name.

here our newly created container is running and exposing 9000 from the host to 80 on the container.

Let’s hit the url “http://localhost:9000/api/values” on browser or postman to verify that our application is running on container or not.

Below are the result of the webapi which is running on container instead of local machine. 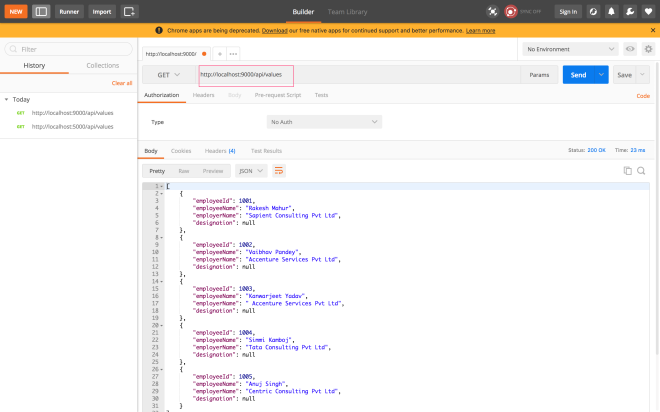 Docker Cloud uses Docker Hub as its native registry for storing both public and private repositories. Once you push your images to Docker Hub, they are available in Docker Cloud.

we need to create docker hub account to push the image on public/private repositories.

Docker image should be tagged with well qualified name before issuing the push command. so below command will tagged the image with name “RakeshMahur/FirstApiWithContainer”.

Now login on docker hub from the terminal window by issuing the “docker login” command and provide the docker hub account details (username/password).

once docker hub credentials has been validated successfully then a message comes on window and now we will able to push image to docker hub.

once we execute above command then we can see our local docker image push to docker cloud repository and listed done over there and every one can pull this image start working on it. 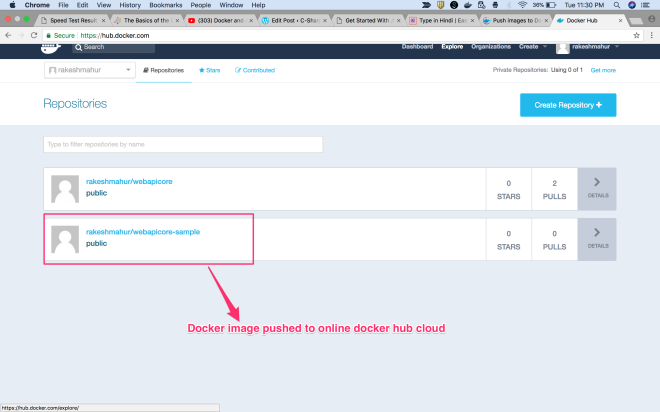 Below are some important and comman used commands , refer to the docker documentation for more details and a more exhaustive list of flags.

In mvc programming a view can be associate with multiple models and developers have to send multiple models from controller to cshtml page.There are many  common approaches like ViewBag,ViewData,ViewModel etc can be use to achieve this functionality.

But here i am not going to demonstrate all above three approches.you can use .net framework 4.0 new features to pass the multiple models from controller to view effeciently.

Let say you have two models named as “Department” and “Employee” and you want bind these two models with mvc view.Below are the model definitions:

Method details fetch employee and department details as per below:

On the view you have to use dynamic property of .net framework 4.0 and need to be declared as @model dynamic.this is not strongly type of view.

In C#, tuples are used to store data. It’s sort of like a variable, but in order for it to be a tuple it must contain more than one value. Each instance of a tuple has a fixed number of items within it (and each item has its own distinct type, eg. a variable or an int), and once the tuple has been created, it can’t be altered in any way.

Let’s continue with previous create models and there are no changes in model class.the only change need to do in controller and view.

Now Controller looks like after code updating for tuples:

you have use tuples at top of the view and you have to declare as per below: 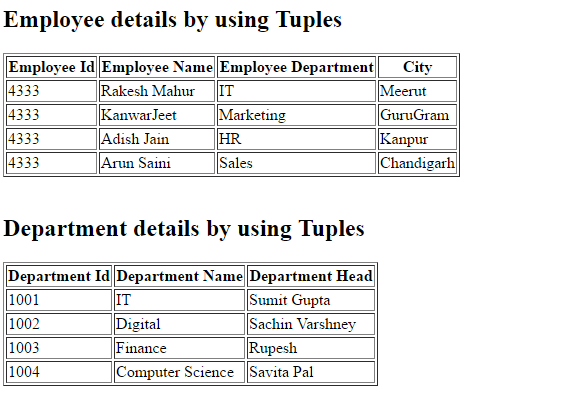 You can see there is no change in final rendered output.

This article describes how to pass multiple models from controller to view .I hope this will be helpful for programmers.

Dependency injection separates the creation of a client’s dependencies from the client’s behavior, which allows program designs to be loosely coupled and to follow the dependency inversion and single responsibility principles.

What is Unity: Unity is a lightweight, extensible dependency injection container that supports interception, constructor injection, property injection, and method call injection.Unity is a general-purpose container for use in any type of Microsoft .NET Framework-based application. It provides all of the features commonly found in dependency injection mechanisms, including methods to register type mappings and object instances, resolve objects, manage object lifetimes, and inject dependent objects into the parameters of constructors and methods and as the value of properties of objects it resolves.

I’m going to create sample web application for Employee details listing website. There I have Employee as main entities.

To install Unity.Mvc5 Library using nuget, we have to right-click on project and click on manage nuget packages. 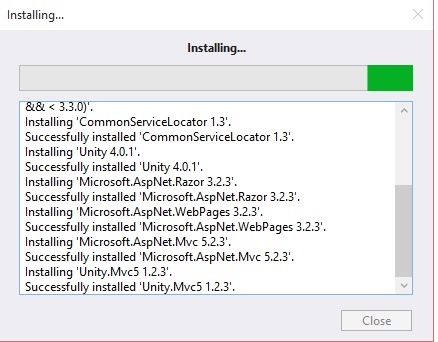 After successfully completion of nuget packages,check the solution explorer and you can see newly added UnityConfig class inside App_Start folder. That’s where we register all our components with the container. 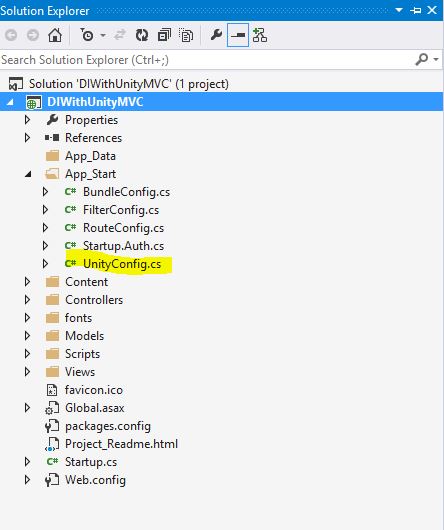 first I’ll add two another Class Library projects called Entities and Services. There Entities project holds all the entity (model) classes we are going to use and Services project will be used to put our service classes.After adding two new projects your solution will look like this. 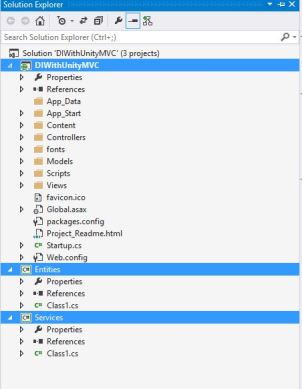 Now i added all required model classes(entities) in entities project.

Next I will add reference to Entities project from Services project and create service classes for Employee . And also I will add relevant interfaces for those classes.

Let’s register our components with the unity container. There first we have to update our UnityConfig class as below.

This RegisterComponents method can be called within the Application_Start method in Global.asax. We can update our Global.asax as below.

Now i am  going to display these employee  information in our web application. I’ll add new Empty Controller called Employee to our MVC application by right clicking Controllers folder.

You can see that i can not create any object of EmployeeService inside the controller.So how employee object available in controller. here DI (Dependency Injection) play vital role and i have use Constructor injection to instantiate the employee class.

Next I will add the view to show the employee details as per below: 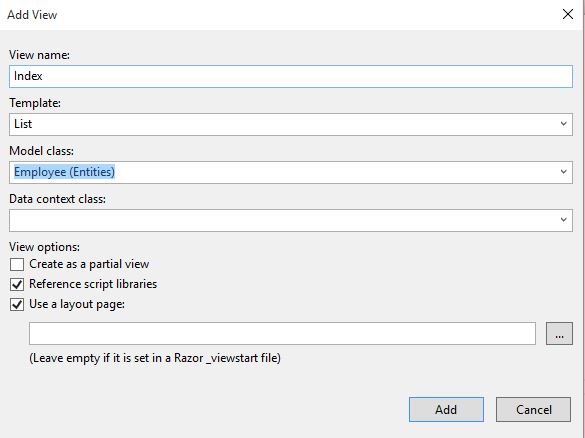 After adding view successfully,your cshtml file will look likes below:

It’s done, you can run your application and try /Institution/Index. You should get following output.

We can move unity configuration to separate file which enable us to do modifications without recompiling existing application. We can do this by adding config section to web.config file as below.

Display and editor templates are way to automatically build UI based on a data model. Essentially, it allows us a way to return mark-up required to display the data for the specified model.

This is awesome because we can create templates for commonly used data models, allowing reuse and a clean razor view. The difference between display and editor templates are:

It was always painful to generate HTML for each property when we have a great feature in the MVC framework (@Html.EditorForModel() and @Html.DisplayForModel() and site.css (Default) where we can modify the user interface).

A common section called “categories” and “Tags” are important part of blog sites and may be these two sections shows many time on different pages.

so my view and it’s html and model classes would typically look something like this.

Output is exactly same as the the desired but there are few things need to be noted that here  foreach loop is used to fetch all items from the collection and bind with html tags.So page performance directly depends on number of items in collection.

it seems ugly with lot of codes with foreach. so it’s better our views remain very simple and clean. With display templates we can make it cleaner.

To make code cleaner we can pass a model or a list of models into html.displayfor() and the framework will take of the rest.

Another Example of Display Templates:

assume you have to show color thumbnail along with other details in tabular format as per below and you may download complete project:

Display templates are  a useful HTML helper built into the MVC framwork. Using them to replace foreach loops allow sus to write clean,readable code that can easily be used across the application.